Jakarta is one of the most popular cities among its neighbors; it is home to some of the top restaurants, but it is still the street cuisine that has made the city famous.

People can eat some of the most basic and delectable recipes. In Jakarta, there are various street food markets where individuals may meet like-minded people while sampling delicious food and learning new recipes.

Here are the 5 amazing food you can find on the street in Jakarta: Ketoprak is a dish made out of sliced fried tofu, steamed rice cake (lontong or ketupat), sliced cabbage and cucumber, bihun (thin rice vermicelli), bean sprouts, and peanut sauce, with krupuk and fried shallots on top. The fried tofu might be regarded as the dish’s showpiece, as it is freshly fried right after the diner orders it, ensuring its freshness and hotness.

Read More: Top 5 Most Popular Mexican Food You Should Try

A typical street snack is ketoprak. It began in Jakarta and has since expanded throughout the island of Java. While the clients are placing their orders, the vendor prepares the ingredients at home and mixes them in front of them.

Small booths or carts along the street sell it in individual quantities. The cook frequently asks the diner if they want it light, medium, spicy, or extra hot when it comes to spiciness.

The amount of chili used determines the level of heat. Depending on the outlet and the ingredients included, prices range from IDR 8.000 to 15.000. A firm-boiled egg is occasionally included. Gulai is a sort of Indonesian, Malaysian, and Singaporean dish with a thick, spicy, and luscious curry-like sauce. Typical ingredients include poultry, goat meat, beef, mutton, various types of offal, fish, and shellfish, as well as vegetables such as cassava leaves, unripe jackfruit, and banana stems.

Gulai is commonly referred to be Indonesian curry, although it is also a popular dish in Malaysia and Singapore. Gulai is a typical word for curry dishes in the country, however, Kari is widely recognized in Indonesian, Malaysian, and Singaporean cuisine (curry).

Gulai ingredients and recipes vary slightly around the archipelago. In Jakarta, for example, gulai is typically light yellow, whereas, in Sumatra, it has a reddish tone. The gulai in Palembang is made up of components including garlic, shallot, turmeric, turmeric leaf, and pineapple.

The ruku-ruku leaf (Ocimum tenuiflorum) is a must-have element in the Minangkabau regions of West Sumatra, while the corriander is preferred in its Javanese counterpart. Another distinction is that tamarind is frequently used in Javanese gulai, which gives it a somewhat sourer flavor than other gulai varieties. Nasi goreng is distinguishable from other Asian fried rice dishes by its smokey scent and caramelized yet savory flavor nuances. There is no one-size-fits-all recipe for nasi goreng, and the ingredients and methods of preparation differ widely from one household to the next.

Nasi goreng has long been regarded as a traditional Indonesian dish. It was officially acknowledged as one of Indonesia’s five national dishes by the Indonesian government in 2018.

It can be eaten in simple variants off a tin plate at a roadside food stall, eaten on porcelain in restaurants, or collected from the buffet tables of dinner parties in metropolitan centers such as Jakarta.

Premixed packaged seasonings for nasi goreng are commonly accessible, and frozen nasi goreng may be obtained at convenience stores all around Indonesia.

Read More: Sea Urchins: Reasons Why They Are Expensive Sate Padang, or Padang satay, is a Minangkabau specialty satay made with beef sliced into small cubes and topped with a spicy sauce. The thick yellow sauce prepared from rice flour, beef and offal broth, turmeric, ginger, garlic, coriander, galangal root, cumin, curry powder, and salt is the dish’s most distinguishing feature.

Many Sate Padang in Medan includes chicken, goat, lamb, and mutton in their preparations. In Medan, fried shallots are also served on top of sate Padang with lontong as a side dish.

Sate padang, sate padang panjang, and sate pariaman are the three types of sate padang.   The color of the sauce distinguishes the three varieties. Sate Padang Panjang is normally served with a yellow sauce, whereas Sate Pariaman is served with a red sauce. The sauces are prepared differently, and the flavors of both sate are distinct. Sate Padang has a flavor that is a combination of the two.

To make the flesh soft and juicy, fresh beef is boiled twice in a big drum filled with water. The meat is then chopped into sections and spices are sprinkled on top.

The broth is then combined with 19 different spices that have been smoothed and swirled with various types of chile to form the sauce. After that, all of the seasonings are combined and cooked for 15 minutes. The sate will be cooked with coconut shell charcoal right before serving. Read More
White-label computers and computer accessories are offered by GMK. Under the GMK brand, they also sell PCs and peripherals directly to customers. Along with Amazon, they also market and sell the NucBox 2 on their own website. My … Read More
Approximately 90% of all Wagyu beef comes from the Japanese Black breed of cattle, although Kobe beef comes from only one of the breed’s core bloodlines, the Tajima. Superior meat and high-quality marbling are desired in this petite, … 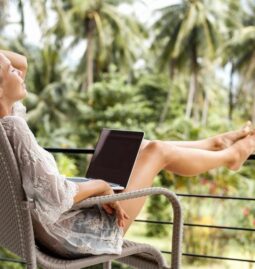 Read More
A book called The Digital Nomad was written by David Manners and Tsugio Makimoto in 1997. The book was all about the innovation of a unique, entire powerful interaction device that would permit workers the power to work …