Holly Sonders born is a drop-dead gorgeous Sports presenter that has caught the attention of many since her teenage days. She started as a women’s golf team member in Michigan State, where she had her university education.

She later got a big break in the sports media industry at Golf Channel, where she started building a career as a TV presenter and a Sports Anchor.

Who is Holly Sonders?

Holly Sonders was born on March 3, 1987, as Holly Niederkohr to Dan and Sandy Niederkohr in Ohio, United States of America. Holly’s father was a practising optometrist at the time of her birth, while her mother was a golf champion. Little wonder Holly Sonders had exceptional golf skills and became an accomplished junior golfer at seven years old.

Holly Sonders has always been involved in one type of sport or another. She played Baseball and Basketball on boys’ teams as a high scholar, and she was a four-year starting point guard on the girls ’ basketball team while she was in college. At fourteen, Holly Sonders became a member of the American Junior Golf Association and UTC National Championship.

She also joined and led the team at Michigan State University for the Big Ten Championship, which gave the team its victory. She was a part of other competitions like the NCAA Regional Tournament and NCAA Championships; she also got the Academic All-Big Ten honour.

With all the wins came an unpleasant period in Holly Sonders’ life. She suffered a knee injury that inhibited her from walking for months. Instead of letting this keep her down, Holly Sonders went ahead to grab a degree in journalism and graduated in 2009. This marked the beginning of her journalism career.

Sonders started her journey as a journalist at KATV in Little Rock, where she reported about tornados and homicides and gained training on the job. After working at KATV, she moved to WBNS-10 TV in Ohio, which is a bigger place than her former workplace. Holly Sonders worked here as a reporting member then later moved to NBC’s golf channel.

While she couldn’t pursue golfing due to her injury, she never let go of golfing as she hosted famous shows that had to do with golf. While working at the golf channel, she worked with Erik Kuselias (who later became her husband), and she got an opportunity to meet a handful of golf celebrities. This made her rise to immense popularity.

After many years of experience and deepened knowledge, Holly Sonders started her own Golf Channel called Morning Drive Opportunities.

In 2015, Fox Network selected Holly Sonders to host the tournament’s broadcast. She started as a studio host for Fox Network, presenting US Open alongside being a sideline reporter for the NFL. Her rise to success and popularity has been exponential ever since.

Sonders met Erik Kuselias (her first known lover) during her time in the Morning Drive. They started as co-hosts of the show and later became a couple despite Erik’s bad reputation. They dated for a while and later got married in 2012.

It was discovered later that Erik Kuselias, a known flirt who was also popular for having a lot of unnecessary affairs, was already married with kids when he got engaged and walked down the aisle with the beautiful Holly Sonders. This led to their divorce in 2016. Sonders said nothing about the divorce until she responded to a tweet made by one of Kuselias’ with, “I filed for divorce over a year ago…we have not been together in a very long time. Thanks.”

After her divorce, Holly Sonders moved on with her romantic life. The news of her new relationship was confirmed in 2019 after she tweeted about her new lover, the then head coach of the Cardinals. His name is Kliff Kingsbury. She met Kingsbury while working as a sideline reporter for the Big 12 Games. Kingsbury was divorced, so the romance was untainted this time. However, the relationship was relatively too short as it ended quickly.

Holly Sonders’ resilience certainly transcends her career as she found herself another significant other in Dave Oancea, popularly known as Vegas Dave, in December 2019. The duo met at a strip club at Crazy Horse, and they had a fast-growing relationship that quickly became an engagement. Right in the middle of the COVID-19 global pandemic, the couple quarantined together in Mexico, and they shared loved-up pictures of themselves amidst the lockdown. After the lockdown, things went down south for the couple upon Dave’s return to his parents, leaving Sonders alone

The breakup between Holly Sonders and Vegas Dave was not confirmed through any means. However, the boxing legend Oscar De La Hoya recently confirmed that he and Holly Sonders are an item after the happy couple was seen stepping out of Nobu restaurant in Miami.

Will Prichard Colon ever return to the boxing rings? Find out here.

Holly Sonders has had her fair share of struggles and troubles, but she manages to glow through them all. While maintaining an absolutely gorgeous body, Sonders built a new website that is now another source of income for her. Will her relationship with Oscar De La Hoya be included in the list of her successes in the long run? We might have to wait a while to know about that. 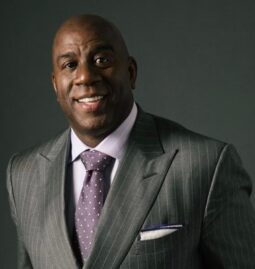 Read More
American citizen Louis Thomas Hardy is the son of well-known English actor Tom Hardy and film director Racheal Speed. He was born on April 8th, 2008. He is a well-known celebrity’s child. His father, Tom Hardy, is a …