She is also well known for her roles as Debbie in The Millers (2013–2014) and Charlie Andrews on the NBC science fiction series Heroes (2006–2010). Trial & Error, an NBC comedy, featured Mays as the prosecutor Carol Anne Keane.

The daughter of Susan Paulette (née Norris) and James Edwin Mays, a high school teacher who also worked in the coal mining sector, Mays was born in Grundy, Virginia. She received an offer at the age of 15 to read obituaries on the local radio station. She obtained an associate’s degree from Southwest Virginia Community College after leaving Grundy High School. After a year at Virginia Tech, Mays transferred to Radford University.

Mays made her debut on television in 2004 on Joey. She had a supporting role in Red Eye the next year, her first appearance in a feature picture. Six Feet Under, Stacked, How I Met Your Mother, Heroes, Pushing Daisies, The Comeback, Entourage, Ghost Whisperer, and Ugly Betty are a few of Mays’ more acting credits.

Other films in which Mays starred included Bar Starz, Flags of Our Fathers, and Blind Guy Driving. She played Amy in Paul Blart: Mall Cop and the lead in the parody movie Epic Movie. In the 2006 House episode “Sleeping Dogs Lie,” she played a patient.

Masi Oka’s love interest was portrayed by Mays in two separate roles: Charlie Andrews on Heroes and Nina in the direct-to-DVD movie Bruce and Lloyd: Out of Control from the Get Smart series. In addition, she was twice cast as Matthew Morrison’s love interest in the television series Glee and the unaired television series Nice Girls Don’t Get the Corner Office, where she played the mysophobic guidance counselor Emma Pillsbury. She appeared in the first three seasons of Glee as a member of the main cast before appearing as a guest star in seasons four, five, and six.

She has also performed musical numbers on Glee, most notably her solo rendition of the Rocky Horror Show song “Touch-a, Touch-a, Touch-a Touch Me” in the episode “The Rocky Horror Glee Show,” which was also the tune she sang during her role audition. In the live-action/animated adaptation of The Smurfs released in March 2010, Mays portrayed Grace Winslow, the female lead.

On Ugly Betty, she also played Charlotte, Henry Grubstick’s ex-girlfriend. By taking the ALS Ice Bucket Challenge in August 2014, Mays contributed to the cause of ALS awareness. She also had an appearance in the “Awakening” music video by Switchfoot.

In the NBC crime comedy Trial & Error from 2017 to 2018, Mays played the prosecutor Carol Anne Keane. She additionally had an appearance in an episode of Great News from 2018 as Cat, Greg’s girlfriend, who was portrayed by Mays’s spouse Adam Campbell.

Mays, Maya Rudolph, and Yvette Nicole Brown were all cast in Disenchanted, the eagerly anticipated follow-up to the 2007 movie Enchanted, which was revealed in April 2021.

Jayma Mays and Adam Campbell met in 2006 while working on the set of Epic Movie. In August 2016, she gave birth to their son Jude Jones.

Who Is Adam Campbell?

Adam Campbell, an English actor, was born Adam Jones on August 19, 1980. He has acted in movies including Wolves at the Door, Epic Movie, and Date Movie from 2006. In Harper’s Island, a horror miniseries, he portrayed Cal Vandeusen. Campbell further portrayed Greg Walsh in the 2017 sitcom Great News and young Donald Mallard in NCIS episodes (2014–16, 2020).

Campbell was initially cast in Commando Nanny, a sitcom that has yet to air but was supposed to debut in 2004 on The WB Television Network. In the 2006 romantic comedy parody Date Movie, which included Alyson Hannigan as Grant Fockyerdoder, he went on to have a minor box office hit in the United States.

Additionally, he had a role in the 2007 independent movie You Are Here, which was about a group of young adults. He played the lead character, Peter Pervertski, in Epic Movie, one of his most significant parts. Cal Vandeusen was played by Campbell in the Harper’s Island CBS miniseries. Adam Campbell was chosen in January 2010 to play Ringo Starr in the canceled 3D remake of Yellow Submarine.

Campbell portrayed Greg Walsh in the NBC sitcom Great News from 2017 to 2018. His persona serves as The Breakdown’s executive producer, Katie’s boss, and potential love interest.

On the set of the movie Epic Movie in 2006, Campbell got married to Jayma Mays, an American singer, and actress. They got hitched on October 28, 2007. Mays and Campbell said they were expecting their first child on April 27, 2016. Jude, their son, was conceived in August 2016.

Read More: Julia Fox Net Worth: All About Her And Relationship With Drake And Kanye West

What To Know About Another American Actress, Hailee Seinfield

Hailee Steinfeld is a young American actress and singer. She is one of the most successful young artists in the world, having achieved enormous success in film and television.

In her brief career, Hailee Steinfeld has amassed a slew of accolades. On the television show “Back to You,” she had a guest appearance. Hailee has starred in a number of films, including Bumblebee, the Pitch Perfect film series, Ender’s Game, Romeo and Juliet, and many more.

True Grit (2010) was her first break, and she received Academy Award, BAFTA Award, and SAG Award nominations for Best Supporting Actress. She was also nominated for a Golden Globe Award and a Critics’ Choice Movie Award for her appearances in the Pitch Perfect film series, which won her a lot of praise.

Who is Hailee Steinfeld?

She began acting at the age of eight, when she was born on December 11, 1996, in Los Angeles, California, to parents Cheri, an interior designer, and Pete Steinfeld, a fitness trainer. Steinfeld claims she got the acting bug from watching her cousin (Emmy winner True O’Brien) star in TV commercials, but her mother insisted she take acting lessons for a year before auditioning. She landed her first agent at the age of nine after attending Cynthia Bain’s Young Actor Studio and began appearing in television commercials, including a Kmart clothing commercial.

Before starting a home-schooling program, Steinfeld went to Ascension Lutheran, Conejo Elementary, and Colina Middle schools in Thousand Oaks, California. In June of 2015, she received her high school diploma. Her mother credits a fourth-grade teacher who nominated Steinfeld for a gifted arts program with helping the family discover her acting potential.

She obtained acting experience during this time by participating in various student films created by aspiring directors at institutions such as USC, UCLA, and Chapman University, as well as appearing in guest appearances on the Fox sitcoms Back to You in 2007 and Sons of Tucson in 2010. She has an elder brother, race car racer Griffin Steinfeld, and is the niece of “Body by Jake” fitness guru Jake Steinfeld.

Hailee Steinfeld started acting when she was eight years old and has since acted in a number of short films. She portrayed the character of Talia Alden in the award-winning short film ‘She’s a Fox.’

She was cast as Mattie Ross in the movie ‘True Grit’ when she was thirteen years old. In 2010, the film had a worldwide distribution. Many critics praised her portrayal, and she received an Academy Award nomination for Best Supporting Actress. Hailee Steinfeld became the new face of the Italian designer brand, Miu Miu, in May 2011, 5 months after the release of ‘True Grit.’

She was cast as Juliet Capulet in a modern adaptation of Shakespeare’s timeless masterpiece “Romeo and Juliet” in 2011. Hailee Steinfeld was only fourteen at the time, despite the fact that the character was written for a 20-year-old actress.

In the science fiction adventure film ‘Ender’s Game,’ Hailee was cast as Petra Arkanian in 2013. In the romantic drama ‘Begin Again,’ Hailee Steinfeld played one of the central characters. On June 27, 2014, the film received a limited release, and on August 29, 2014, the Weinstein Company re-released it. She played Eliza in the film adaption of “Ten Thousand Saints,” which debuted at the 2015 Sundance Film Festival on January 23, 2015.

She’s also starring in the cinematic version of Caren Lissner’s Young Adult novel “Carrie Pilby.” Hailee Steinfeld voiced Anna in the English dub of the Japanese animated film “When Marnie Was There” in March 2015. Hailee appeared in Taylor Swift’s ‘Bad Blood’ music video. At the 2015 Billboard Music Awards, the video was first shown.

She went on to star alongside Anna Kendrick, Rebel Wilson, Elizabeth Banks, and others in the global franchise of ‘Pitch Perfect 2’.
In May 2015, Republic Records signed Hailee Steinfeld after ‘Pitch Perfect 2.’ After hearing her sing in the film, the corporation decided to hire her.

After that, on February 27, 2015, she released a single called “Rock Bottom.” Hailee Steinfeld released her new single “Starving,” which she co-wrote with Grey and features Zedd, on July 15, 2016. This song has gone double platinum in Australia and triple platinum in Canada, making it her most successful to date.

Hailee’s strange performance in the film “Edge of Seventeen” got her a Golden Globe nomination. On November 18, 2016, the film was released in theaters. On April 28, 2017, Hailee Steinfeld released ‘Most Girls,’ her latest music single.

On Charlie Puth’s Voicenotes Tour, Hailee also assisted him. She was featured on rapper Logic’s song “Ordinary Day” from Charlie’s album YSIV, as well as a remix of Drax Project’s “Woke Up Late” that was released as a single in 2019. “Wrong Direction” and “I Love You’s,” her own two singles, were released. Half Written Story, her EP, was released on May 8, 2020.

On January 12, 2018, she released her “Capital Letters” soundtrack for the critically acclaimed film Fifty Shades Freed. She also had the opportunity to perform in Jakarta for the Indonesian Choice Award. She also voiced Gwen Stacy, also known as Spider-Woman, in the Academy Award-winning animated feature Spider-Man: Into the Spider-Verse.

At the age of thirteen, Hailee Steinfeld played Mattie Ross in the film ‘True Grit,’ and it was this part that catapulted her to popularity. She starred in ‘Ender’s Game,’ a critically praised science fiction adventure film. In the modern adaptation of Shakespeare’s classic ‘Romeo and Juliet,’ Hailee Steinfeld was cast as Juliet. Julian Fellowes was in charge of the project. Hailee won a position in the ‘Pitch Perfect’ global franchise. The film was a great hit.

Hailee Steinfeld was nominated for an Academy Award, a BAFTA Award, and a Screen Actors Guild Award for Outstanding Performance by a Female Actor in a Supporting Role for her outstanding performance in the film “True Grit.” 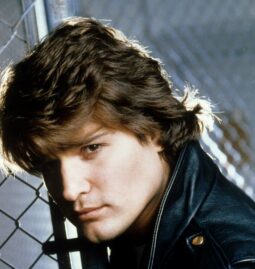 Read More
In addition to playing the role of Officer Doug Penhall in the Fox television series 21 Jump Street, Peter DeLuise is an American actor, television director, producer, and screenwriter. He is also well-known for having written and directed …