The relationship between Keanu Reeves and Alexandra Grant is adorable. In 2009, the two connected over dinner and have been in love ever since. Even though Keanu hasn’t yet discussed getting married, it’s obvious he has discovered his true love in the stunning visual artist.

Who Is Alexandra Grant?

Alexandra Grant, a renowned visual artist who investigates the use of words and language in numerous mediums, is a self-described Los Angeles resident despite being an Ohio origin. She has received praise for her works, and articles about them have appeared in a variety of journals, from the Los Angeles Times to Whitehot Magazine of Contemporary Art.

Alexandra Grant is famous for her teamwork projects in which she works with renowned literary pioneers and philosophers. Keanu Reeves, a longstanding acquaintance of the artist, was a part of one of her earliest projects that led to global notoriety. The two are believed to have first connected around the time their debut book was released in 2011, albeit the specific moment is unknown.

Years later, when they made their public debut as a couple in 2019, their connection transformed from platonic to romantic. Reeves, who is infamous for keeping his love life a secret, recently made another public appearance with Grant when they walked a red carpet together on June 4 in Los Angeles.

As A Successful Visual Artist

A talented artist with a home base in Los Angeles, Alexandra Grant has created an incredible body of work over the years. Although she emphasizes painting as her preferred medium, she has also tried other creative endeavors.

Additionally, Alexandra Grant is well known for her partnerships, such as those she formed with pioneering digital author Michael Joyce and renowned feminist Hélène Cixous. Numerous pieces from her collections have been exhibited in major exhibitions like the Marfa Invitational in Texas and the Orange County Museum of Art in Santa Ana.

Alexandra Grant speaks English, Spanish, and French as a result of her school background. Grant spent most of her childhood attending a number of different schools that exposed her to cultures other than her own, even though she currently resides in Los Angeles. She attended the International School of Paris in Europe, a boarding school in Missouri, and a British school in Mexico City.

She stated to LA Weekly in 2019 that she “grew up in parts in Mexico City, Washington, D.C., and Paris, traveling between languages and cultures.” “Los Angeles felt like home from the moment I first arrived in 1995, especially the diversity of people, idioms, foods, and plants (like jacaranda and bougainvillea).”

She was a college professor

Grant also taught students when she worked as a college professor at a few different schools across the United States in addition to her career as an artist. (She is not one professor’s daughter, but two.)

She first began working from 2009 to 2011 as an adjunct professor at the ArtCenter College of Design in Pasadena, California. She instructed an MFA course at Cal State Northridge in 2010 during that time. From 2013 to 2014, she then acted as a mentor in the distance MFA program at the Pacific Northwest College of Art. In 2015, she continued the responsibility at Syracuse University.

Alexandra And Keanu Worked On A Book Together

As longstanding friends, Grant and Reeves collaborated on the publication of Ode to Happiness in 2011, a grown-up picture book featuring artwork by the artist and text by the actor.

Along with Grant’s first artist book and Reeves’ first written piece, this was also the beginning of the two’s first joint project. They once again combined their skills in 2016 for the Shadows collaboration. A collection of 54 photographs taken by Grant that were inspired by Reeves’ motions are included in the art book.

Grant and Reeves created X Artists’ Publications in 2017, a publishing company that, according to its website, specializes in “thoughtful, high-quality, artist-centered books that fit within and between genres.” Our books are works of art, doors to fantastical realms, beloved friends, and the foundation of a culture. The company’s acronym, XAB, is frequently used to identify it.

She Made Her Red Carpet Debut With Keanu Reeves

Alexandra Grant and Keanu Reeves made their public entrance as a couple in 2019 by walking the red carpet together at the LACMA Art + Film Gala.

She Is A Philanthropist

The grantLOVE project was founded by Grant, and it makes and sells original artwork to support artistic endeavors and charitable organizations. She began the project in 2008.

According to her website, the initiative has raised money for Heart of Los Angeles (HOLA), Project Angel Food, Art of Elysium, 18th Street Arts Center, and LAXART.

What To Know About Keanu Reeves

Keanu Reeves is a Canadian actor who was born on September 2, 1964. Reeves, who was born in Beirut and raised in Toronto, began his acting career in theatre and television before starring in Youngblood (1986). He made his film debut in the science fiction comedy Bill & Ted’s Excellent Adventure (1989), which he reprised in the sequels. With prominent parts in Point Break (1991) and Speed (1994), he established himself as an action hero.

His performance in the horror thriller The Devil’s Advocate (1997) was positively acclaimed after many box office failures. Beginning in 1999, he rose to greater fame as Neo in the science fiction series The Matrix. He starred in the romance drama The Lake House (2006), the science-fiction thriller The Day the Earth Stood Still (2008), and the crime thriller Street Kings as John Constantine (2008). Following a string of critically panned and low-grossing films, Reeves made a comeback in 2014 by starring as the titular assassin in the John Wick film series.

He has directed the film Man of Tai Chi in addition to acting (2013). He has also dabbled in writing and philanthropy while playing bass guitar for the band Dogstar.

Keanu Reeves was born in Beirut, Lebanon. His father Samuel is from Hawaii, while his mother Patricia is from Essex, England. While working as a costume designer in Beirut, Reeves’ mother met his father.

After his father abandoned the family when he was three years old, he spent much of his early life globetrotting with his mother, eventually settling in Toronto and becoming a Canadian citizen in 1971. Reeves’ education was hampered by dyslexia. He got kicked out of several high schools.

On the ice, though, he made up for his poor grades by leading his high school hockey team to victory. Reeves quit hockey and school to pursue a career in acting after performing in a school production of Romeo and Juliet and discovering his love of the stage.

Beginning with tiny appearances on Canadian television, commercials, and stage performances, Keanu Reeves made his big-screen debut in 1986 with Youngblood. He went on to have several co-starring roles, including a more significant part in the critically praised River’s Edge. With the 1989 big movie Bill and Ted’s Excellent Adventure, Reeves had an unexpected box office success, grossing over $40 million domestically. Keanu Reeves went on to star in several major and independent films, including the drama Point Break and the cult classic My Own Private Idaho.

With the success of the 1994 action film Speed, Reeves was catapulted into A-list fame, earning two Academy Awards and grossing $350.5 million worldwide and domestically. Reeves went on to star in The Matrix trilogy, a $1.6 billion science fiction action picture franchise. His performance as Neo was well-received and applauded, and the films were hugely successful.

Keanu Reeves was cast as the titular character in the action film “John Wick” in 2014, in which he played a former hitman. The films were critically praised and box office hits. He went on to play the same character in two more films. His John Wick film franchise has grossed more than $500 million worldwide. After accounting for inflation, Keanu’s films have made more than $4.6 billion worldwide as of this writing.

“KeanuCon,” Europe’s first Keanu Reeves film festival, was held in Glasgow, Scotland in 2019. It took place on April 27th and 28th and featured nine of his films throughout the two days.

Keanu Reeves has a net worth of $380 million as an actor, singer, producer, and philanthropist. He has appeared in dozens of films throughout the years, some of which have grossed billions of dollars at the box office. He is possibly most remembered for his roles in The Matrix and John Wick.

Earning From The Movie, The Matrix

After Will Smith turned down the role of Neo in The Matrix, Keanu secured the job. His first compensation was set at $10 million. He was also awarded a piece of the backend, which resulted in total earnings of $35 million for the first film, thanks to the film’s unexpected success. After inflation, that equates to roughly $53 million. Warner Bros. announced the fourth Matrix installment in August 2019.

Keanu’s backend bonuses would eventually make him the highest-paid actor of all time for a single franchise, thanks to DVD sales (The Matrix was one of the best-selling DVDs of all time) and the massive box office success of the second and third films. From the second and third films, Keanu earned at least $120 million in bonuses. As of this writing, his total earnings from The Matrix from all sources exceed $200 million.

On December 24, 1999, Jennifer Syme, Reeves’ girlfriend during the 1990s, gave birth to their stillborn daughter, Ava Archer Syme-Reeves. The sadness harmed their relationship, and they split up a few weeks later. Jennifer died in an automobile accident in April 2001, and she died instantly. Reeves needed time to deal with the situation because he was slated to begin filming The Matrix sequels back-to-back at the moment. He dated China Chow in 2008. He has never been married and is infamous for keeping his personal life private. Although Reeves is not religious, he is interested in Buddhism and considers himself spiritual.

In 2014, two stalkers broke into Keanu’s Hollywood Hills house. The first was on September 12, when he awoke to a stalker in his library, telling him she was waiting for him. After carefully speaking with her, he phoned the cops. Three days later, a second stalker entered his home through a gate that Reeves’ cleaners had left unlocked. Before swimming naked in his pool, the stalker stripped and took a shower in his bathroom. Although Reeves was not at home at the time, the cleaning team informed the authorities, and the stalker was removed.

He established a cancer foundation but decided not to put his name on it. He is a supporter of PETA, Stand Up to Cancer, and SickKids.

In addition to acting, Reeves spent several years in the 1990s playing bass guitar with the band Dogstar. He’s also a motorcycle enthusiast who co-founded Arch Motorcycle Company, which makes custom motorcycles. He also co-founded Firm Films, a production company. Reeves is the founder of X Artists’ Books, a small publishing house. Ode to Happiness and Shadows are his two published works. 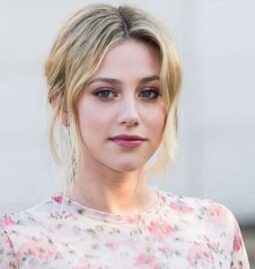 Read More
Lili Reinhart is an actress from the United States. She is most known for her roles as Betty Cooper on The CW’s Riverdale (2017–present) and Annabelle in Lorene Scafaria’s black comedy crime drama film Hustlers (2019). Chemical Hearts, …