If you have ever seen a Moss Agate gemstone, you were probably astounded by its whirling greens, brilliant vitality, and renowned character. Moss Agate has mother nature’s imprint in the form of its forest green color.

Regarding this gorgeous gemstone, there is more to it than meets the eye. Moss Agate is thought to have a variety of cleaning qualities that can both physically and emotionally help with harmony, success, and prosperity. Moss agate is thought to provide a stronger sense of self-connection on a spiritual level.

What is Moss Agate

The green dendritic inclusions that resemble moss are what give this stone its nickname, Moss Agate.

In most cases, agate is a banded stone, which means that bands may be seen all around the gemstone, like Jupiter’s rings. Even though Moss Agate isn’t banded, it belongs to the family of agates. Chalcedony, a mineral belonging to the quartz family, is also a variation of agate.

Read More On: The10 Best Most Expensive Rolex Watches

New beginnings are represented by the gemstone moss agate. It is said to refresh the soul and let you perceive the beauty in everything. Each stone has unique mythology inherent in it that encourages self-expression, spurs creativity, and lessens stress.

In essence, there are no boundaries to the value that Moss Agate can add. A wealth-encasing and abundance-attracting stone, it has a long history of doing so.

How does Moss Agate appear?

Clear or milky white Moss Agate is a gemstone that resembles moss since it is filled with minerals that are green in hue. Despite the fact that Moss Agate kinds are primarily green, they can also have blue, yellow, black, brown, white, or red patches. A variety of hues of green, from deep forest green to lighter green stones, are also possible for the color.

Iron or chrome impurities, which are present in Moss Agate in tiny levels, are what give the stone its distinctive colors. The oxidation state (valence) of the metals, which creates the Moss Agate’s characteristics, results in distinctive colors. It does not contain any organic material, despite the name “Moss Agate.”

History of the Moss Agate stone

Due to Moss Agate’s green tones, British farmers thought that it would bring prosperity to their lands as far back as the 18th century. Because they believed it would bring them a bountiful harvest, European farmers would dangle Moss Agate from tree branches and from the horns of their livestock.

Moss Agate has long been regarded as a lucky stone. Flowers appear to bloom stronger and fuller when left in the garden. Businesses develop and prosper when kept in the workplace.

Moss Agate has a long history of being associated with gardening and agriculture. Tribal priests were also thought to possess the ability to communicate with the human organic system thanks to this stone, which was also regarded as a miraculous healing resource. As a charm for courage and power, warriors utilized Moss Agate.

The metaphysical qualities of Moss Agate are similar to those of other gemstones and represent a deeper significance. One of the meanings of Moss Agate is that it promotes emotional harmony and peace. It is thought to help those with intense feelings of aggressiveness or emotional outbursts by restoring their equilibrium.

Moss Agate also promotes tranquility and puts us nearer to nature. When we need to unplug from the noise and chaos of the current world, it makes us feel more patient and in the moment.

This unique diamond is also linked to the emergence of new friendships. Because Moss Agate is thought to foster a feeling of connection and relatability, many people wear it when meeting new people.

Where is the Origin of Moss Agate?

The name “Mocha Stone” or “Mocca Stone” for Moss Agate comes from the Yemeni city of Mocha in Arabia, from which the stone was originally mined.

The United States, Brazil, Uruguay, India, and central European nations are just a few of the nations where you can locate Moss Agate.

Typically, worn volcanic rocks are used to create moss agate. Moss Agate can be found in the alluvial gravels of the Yellowstone River and its tributaries between Billings and Sidney, Montana, in the United States.

It is not an artificial stone; it is a naturally occurring stone. To obtain a wider spectrum of colors or to emphasize the natural Moss Agate colors, it is frequently colored while being sold commercially.

Typically, Moss Agate costs from $1 and $10, which is considered to be low-cost. However, depending on their colors, types, and the area in which they were discovered, pricey and uncommon specimens of Moss Agate can range in price from $100 to $3,000.

Read More On: Important Of Hair Mask And Treatment That Work For All Hair Issues

Moss Agate shares the same astrological sign affinity with Gemini as all other agates: Moss Agate pairs perfectly with Geminis and their contradictory personalities due to its projected balancing quality. More information is available in our comprehensive birthstone-by-month guide.

Twins serve as the symbol for Geminis, who are said to be flexible, creative, and good communicators. When it comes to expressing yourself artistically and successfully, Moss Agate can be a great tool for Geminis. You can welcome new experiences and change with the aid of moss agate.

What is the green in Moss Agate?

Metal impurities like iron or chrome are what give Moss Agate its green spots. When these minute amounts of metal become embedded in the stone, the minerals create mainly green patterns that give the impression that moss is growing inside the stone.

Read More On: 15 Beautiful Purple Nail Designs You Should Try

Which Family is Moss Agate from

A form of chalcedony that is a member of the quartz family is called moss agate. A very fine intergrowth of moganite and quartz makes up chalcedony, a cryptocrystalline type of silica.

What Does Moss Agate Symbolize Spiritually?

Moss Agate is regarded as a “growth crystal,” a potent conduit of the earth’s conception, growth, and creation as well as the power of nature’s ongoing rejuvenation. It is a stone that is thought to increase optimism, creativity, and self-confidence.

By keeping you connected to the outside world, Moss Agate helps you relax and soothe your soul, much like taking a walk in the woods. For additional information, see our comprehensive birthstone-by-month guide.

What Are The Benefits of Moss Agate?

It is believed that Moss Agate has a number of mental, physical, and emotional healing powers that can help you feel better physically and mentally. This gem is thought to have exceptional anti-inflammatory effects and help the immune system.

Moss Agate has the unique ability to uplift you and give you the self-assurance need to face any difficulty. This whirling green stone can balance your energy and cultivate your self-esteem by making you feel grounded in the soil. To find out more about the stone, see our moss agate guide.

What Significance Does Agate Have Spiritually?

Positive thoughts and original ideas are often associated with agate. In addition, it stands for harmony and rebalancing.

Agate stones were once used by Persian magicians to control the lightning and thunder that raged over the sky. Agate was employed in Chinese medicine to revitalize the patient’s own qi. To calm our fears and keep our emotions in check in the modern day, we turn to agate.

Read More On: How To Choose The Eyeliner That Matches Your Eye Color Best

Where Should I Put My Moss Agate?

This precious piece of nature makes a lovely accent to any home or area.
All the healing qualities of water, air, and earth will be brought to your workplace if you have Moss Agate there. It will encourage optimism and abundance while keeping your thinking inventive.

Wearing Moss Agate jewelry is the ideal method to keep it close to you.

Read More
A tattoo is about as permanent as it gets in terms of beauty and body art, so it makes sense that you’d want to be as prepared as you can be before sitting down in the chair. You’re … 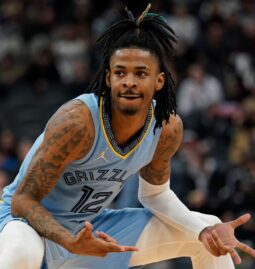 Read More
Ja Morant has made a name for himself as one of the NBA’s most exciting players and a real MVP contender in just his third season. Ja Morant not only plays well, but his shoes are also very …