The Samsung Galaxy Z Flip 4 is more of an improvement over the model from the previous year. It has smoother corners and smaller bezels to give off a more expensive appearance. With the content production tools and overall feel of the device, Samsung is definitely catering to the younger demographic, saving the “mature” and “professional” appearance for the Galaxy Z Fold 4.

With a brighter primary sensor, Samsung was able to improve the cameras’ low-light photography. The ultrawide camera, though, is still present, and the Galaxy Z Flip 4’s cameras perform virtually the same as the Galaxy Z Flip 3’s, that is, below what you might anticipate from a $999 phone. However, the night mode is fantastic.

The 2022 Galaxy Z Flip specification list is presented below along with all the information on how it differs from the Flip 3, including a less noticeable fold crease, a larger battery, an improved SoC, and a larger cover screen.

The Samsung Galaxy Z Flip 4 has been available for purchase since August 26, 2022. On August 10, 2022, at the same Samsung Unpacked event where the Galaxy Z Fold 4 and Galaxy Watch 5 were announced, it was introduced.

The Galaxy Z Flip 4 hardly appears any different from the outside. You’ll probably be ok with this if you adore the clamshell foldable design. The phone is the best huge phone, but it fits well in my pocket without protruding.

Similar to last year, Samsung offers a wide range of color choices for the Galaxy Z Flip 4. If you want something reasonable, you can choose the Graphite choice, but you can also choose from the more vibrant Blue, Pink Gold, or Bora Purple options.

However, if you look closer, you’ll see that this year’s Galaxy Z Flip 4 has smoother edges. Despite being shiny and therefore slippery, they nonetheless manage to offer some good grip to a phone that is already ergonomic. On this model, the camera module protrudes a little more, presumably due to the new main 12MP sensor.

Samsung praised the Galaxy Z Flip 4’s lighter and smaller hinge, although the gap between the two displays at the hinge when folded is still clearly visible when the phone is closed. It appears Samsung was more interested in emphasizing the weight and thickness of the hinge than the gap.

You can access things like Samsung Wallet or SmartThings and receive valuable information on the 1.9-inch cover display, which is still present. As soon as I opened the phone, I noticed the thinner bezels. The Galaxy Z Flip 4 appears much cleaner and more contemporary than the Galaxy Z Flip 3, which had a few really prominent ones.

Here are your possibilities (a trade-in will somewhat reduce these costs): 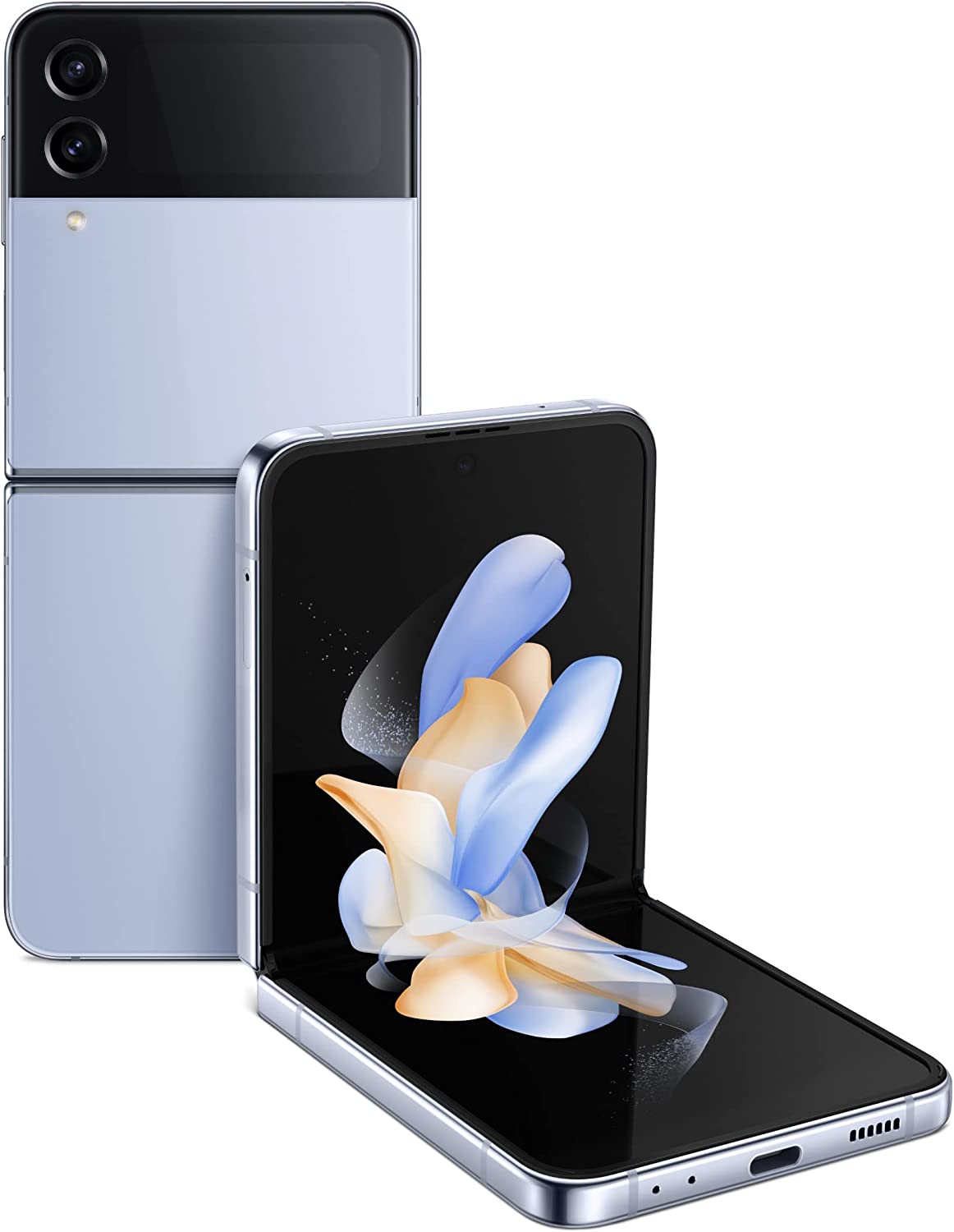 Features of the Samsung Z Flip 4

Samsung provides the Z Flip 4 with One UI 4.1.1, which is based on Android 12. Along with standard features like NFC, Samsung Pay, IPX8 water resistance (up to 5 feet of fresh water for 30 minutes), and stereo speakers, it supports 5G.

With FlexCam, you can shoot without using your hands. Use the phone’s bottom half as a stand or hold it in your hand to take selfies.

You may customize the Cover Screen to your liking by adding movies, photographs, emoticons, and other content to make the clock face more unique. Without ever opening the Main Screen, you may react to texts and install widgets for quick access to your preferred apps thanks to this smaller screen’s access to Quick Settings.

A small cover display, the same size as the one on Flip 3, is located on the outside of Flip 4. Functionality-wise, it functions essentially the same as well. Wish it had done more.

Some messaging apps now allow you to send pre-written responses directly from the cover display. However, it is not possible to enter or dictate a response without first picking up the phone. The cover screen is the area of the Flip 4 that Samsung might improve the most.

Although the majority of apps aren’t designed for Flex Mode, Samsung provides a clever workaround under Settings called Labs that allows you to force any app into Flex Mode. Typically, the Samsung default Flex Mode interface is on the bottom and the app is moved to the upper half. So while it functions technically, it doesn’t accomplish much.

The trackpad and tiny cursor are Flex Mode’s two biggest new additions. The tiniest cursor in existence can be used to click on menu items and open buttons, or two fingers can be used to slide and move around like when using Google Maps’ street view. Although this trackpad appears like a unique concept, it is not particularly useful in practice.

The clamshell foldable design of the Galaxy Z Flip is what makes it unique. That won’t change because it’s what made the Flip 3 the most popular folding phone on the market.

The display crease won’t be as obvious because the hinge is thinner and lighter, which will reduce the overall weight of the tablet. When the phone is unfolded, the crease is what you can see and feel. Any reduction from the Flip 3 is an improvement because it spans the entire screen.

When you partially fold the Galaxy Z Flip 4, such as at a 45- or 90-degree angle, Flex Mode activates. The main functionality of your present program will be split into an upper and lower half, with extra possibilities. Even the trackpad has a new feature that makes it simpler and faster to navigate across programs.

Compared to Flip 3, the battery is a tad larger (3300 mAh to 3700 mAh). The battery will last longer on a single charge thanks to this as well as the upgraded SoC’s increased power efficiency. Instead of 15W, 25W rapid charging is supported.

The phone’s unfolded screen will remain at 6.7 inches, the cameras won’t change from last year’s model (improvements are anticipated to come through software updates), and the memory will remain at 8 GB. This time around, a 512 GB variant is furthermore offered alongside the same internal storage options. Read More
It takes an act just to get dressed for a concert. Looking the part is essential for the evening, whether you’re attending an A$AP Rocky or Metallica performance. It’s best to keep to a theme in some cases, … Read More
Damon Herriman’s big performance in the 2019 film Once Upon A Time In Hollywood attracted much attention. The actor’s portrayal of the real-life serial killer Charles Manson wowed viewers all around the world. Although some people would think … Read More
Clase Azul tequila can be described as having authenticity, decadence, and an artistic streak, to name just a few. It’s an Azul Tequila you can trust, from its working conditions and sustainability strategy to its unrivaled creamy, fruity, …