With an increasing number of new series featuring strong gay, bi, lesbian, and trans main characters who viewers can relate to and learn from, the number of LGBTQ shows on Netflix streaming service has grown significantly in recent years. The best part is that these Netflix shows span a variety of genres, giving fans of romance, drama, comedy, mystery, and sci-fi greater representation than ever before.

On June 10, First Kill was released on Netflix. A vampire-centric series about the forbidden romance between a vampire and a monster hunter is based on the short novel of the same name by the talented author Victoria “V.E.” Schwab. The character Juliette, a teenage vampire who has reached the age at which she must commit her first kill in order to claim her proper place among her powerful vampire family, is introduced to viewers.

Also required to make her first kill is Calliope, a teenage monster hunter. But after they get to know one another and the sparks start to fly, Juliette and Calliope quickly realize that the other won’t be so simple to kill, especially when romantic sentiments are involved.

In addition to being one of the top mother-daughter teams, Ginny and Georgia also feature one of the cutest gay couples. Ginny meets Max in her new town during the first season of the teen drama. Max, a teenager who is openly lesbian, has a thing for a heterosexual girl. Naturally, things don’t work out well, and Max experiences heartbreak as a result. However, an instant connection happens when Max meets Sophie, whom she characterizes as the “hottest girl in school.” When they finally get together, the young couple has a ton of cute moments that the audience can see.

In April 2022, Heartstopper had its Netflix debut, and people are still raving about it. The same-named webcomic and graphic novel by Alice Oseman have been adapted into a television series. The narrative centers on Nick, a gentle rugby-loving athlete, and Charlie, a high-strung, openly gay teen.

When the two first see each other in secondary school, they soon become friends, which leads to an unanticipated relationship. Heartstopper needs to be watched as soon as possible if you haven’t already. Two more seasons of the teen drama are coming out soon.

Young Royals is the next show on our ranking of the top LGBTQ+ Netflix series. A Prince named Wilhelm (Edvin Ryding) enrolls in a famous boarding school after becoming embroiled in a major controversy in this Swedish teen drama series.

Wilhelm can finally discover who he is and what sort of life he wants by enrolling in the boarding school in order to escape his royal duties. The connection between Wilhelm and Simon (Omar Rudberg), a scholarship student, develops while they are both attending boarding school.

There will always be drama in relationships, and Wilhelm and Simon’s is no different. Since the second season of Young Royals is expected to premiere this year, make sure to watch it as one of your first shows for Pride Month.

Sex Education, therefore, has multiple LGBTQ+ characters and relationships, which is something I particularly like. I adore it because it’s one of the queerest teen sitcoms ever! A love triangle with an openly gay character and two boys were featured in the teen drama, which was unusual for television.

It was exciting to see the love triangle cliché applied to LGBT people because it is normally reserved for straight couples. Also present is a rarely seen queer couple made up of a pansexual lady and a bisexual woman. A non-binary character is presented to the audience in season 3 and their backstory is revealed.

It was great to see the non-binary community represented in Sex Education because there is a dearth of non-binary representation in the media.

6. Orange Is the New Black

Orange Is the New Black must be included on any list of the top LGBTQ+ Netflix series. The comedy-drama series was an instant sensation when it debuted on Netflix in 2013. The romance between Piper and Alex won many over. You knew that Piper and Alex truly loved each other despite all the drama and betrayal between them.

Poussey and Soso were another adorable LGBT pair on the show. It was fascinating to see how their love affair developed. Then there were other wonderful LGBTQ+ characters like transgender woman Sophia Burset and openly lesbian Nicky Nichols. Orange Is the New Black probably hasn’t been on your television for a time if you’ve already watched it.

Another Netflix program with numerous LGBTQ+ characters and relationships is Elite. The lives of the kids at a famous secondary school in Spain are followed in the teen drama series. Romance, drama, murder, and more drama all exist. One of the top teen programs on Netflix, if not the greatest. Rebe and Mencia were one of the main couples that many people fell in love with. You couldn’t help but want them to be together because there was simply so much chemistry between them.

Additionally, there is a bond between Omar and Ander. Despite their relationship’s many ups and downs, you can tell they are soulmates. Patrick, the openly gay teen who has no problem causing difficulties for other characters, must also not be forgotten. If you haven’t already, you should definitely check out Elite during Pride Month.

Before it was canceled, this show had so much potential, but regrettably, Netflix didn’t see it. We all enjoy a good narrative about enemies-turned-lovers, and Teenage Bounty Hunters delivered on that front. The program centers on Sterling and Blair, two teenage twin sisters who, in order to pay for the repairs on their truck, surreptitiously train as bounty hunters.

Because Sterling is introduced to viewers while she is dating, her sexual orientation is never fully established. She starts to feel affection for April, her former friend, and adversary. Later, it is discovered that April had affection for Sterling as well. There were some difficulties for the young pair, just like in any tale of enemies-turned-lovers.

Even though there was only one season of the show, we still think you should watch it because Sterling and April had many adorable moments together.

A five-episode documentary series about the vast world of sports includes this movie. After setting records and taking home the gold in the decathlon at the 1976 Olympics, Caitlyn Jenner gained fame. But her quest for athletic greatness and celebrity on a national scale kept her from discovering who she really was. Untold: Caitlyn Jenner aims to give an unbiased view of her life by utilizing never-before-seen home movies and archival material.

Teen drama Grand Army centers on the lives of five high school kids as they deal with sex, racial, political, and other issues. A remarkable group of young performers, including Sid, a Harvard-bound swimmer and the son of Indian immigrants who struggles with his sexuality, Amir Bageria, tackle these issues. Although some viewers may find the show a touch too grim, it frequently represents Gen Z living with sincerity.

11. She-Ra and the Princesses of Power

She-Ra and the Princesses of Power is a remake of the beloved He-Man and the Masters of the Universe spinoff from the 1980s, She-Ra: Princess of Power. One of the most inclusive cartoon series in recent memory is She-Ra and the Princesses of Power. It centers on Princess Adora and her fellow royals as they lead a revolt against the Horde, a terrible force bent on destroying the earth.

Adora’s frequent nemesis and later love interest Catra is the major antagonist. The emotional center of the five seasons of the show is their connection. The engaging narrative and eye-catching images are also delightful.

Barney (Zach Barack) and Norma (Kody Kavitha), two teenagers, are eager to work at a nearby theme park’s haunted house during the summer. However, when they find out that it’s populated by real witches and demons, they begin to regret their choice.

Dead End: Paranormal Park, the first children’s program with a transgender lead character, is based on the graphic novel series DeadEndia by Hamish Steele, who also creates the program.

The life and career of American fashion designer Roy Halston Frowick are explored in this short-form series. He gained worldwide recognition in the 1970s as “Halston” and was known for his simple designs. The pillbox hat Jacqueline Kennedy wore to her husband’s inauguration as president in 1961 is among his most famous designs.

Everyone will love the magnificent graphics and entertaining performances by Ewan McGregor and Krysta Rodriguez, who play designer Halston and actress Liza Minelli, in this glimpse into the 1970s and 1980s fashion industry.

Read More
Launched in November 2014, Nintendo’s Amiibo technology brings virtual toys to life. It comprises a wireless communications and storage protocol that allows figurines to be connected to the Wii U, Nintendo 3DS, and Nintendo Switch gaming consoles. The … Read More
Due to the nerves, thin skin, and close closeness to the bone, spine tattoos can be extremely painful and are one of the most painful body parts. The region is reserved for the bold and courageous who are … 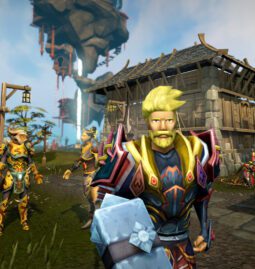 Read More
RuneScape is the largest MMORPG in the world and arguably one of the most well-known online games ever, with over 250 million accounts generated, numerous spin-off games, a number of publications, and a very devoted audience. Find out …